The Series-E from JAC Vapour is now available as a battery-only purchase (£22.99*) or as part of a kit (from £33.99*), which will include the basic package or Aero Tank and Protank options.

The JAC Vapour Series-E claims to provide an affordable option between classic eGo-type 510 batteries and more serious (and pricier) big-battery mods. It offers several previously unseen features as well as some improvements in existing battery design.

The Series-E rechargeable battery is claimed to be stronger, more compact and more powerful than previous JAC Vapour  models, with a higher 1000 mAh capacity for longer use between charges, and better vapour production.

Users can control battery power (and vapour strength) by simply clicking the main on-off power button three times to scroll through a choice of three separate voltage settings, indicated by coloured lights set into the button.

A hidden spring-loaded battery contact point allows a closer fit between the rechargeable battery and the atomiser unit, aiming to provide more consistent and reliable charging and power functioning while the device is in use.

I tested the Series-E with the high-capacity Aero Tank unit, one of the kit options JAC vapour will be offering once the device goes on sale later this month. The Aero tank was primed with some of JAC Vapour’s own PG eliquid at 12mg/18mg strength, so as to get a fair idea of voltage options without throat hit getting too strong or sharp.

Out of the box, the JAC Vapour Series-E battery is suprisingly heavy and has a solid, chunky feel with a clean, unfussy metallic finish.

Logo and other brand features are quite subtle, and do not detract from the overall effect, with the final “C” of the JAC logo lightly etched onto the main power button, which is itself set flush with the battery casing.

Once assembled with the Aero Tank and filled, the Series-E becomes satisfyingly heavy in your hands, though to be honest looks a bit odd until you attach the steel “Beauty Ring” collar unit which should come as part of your kit option. 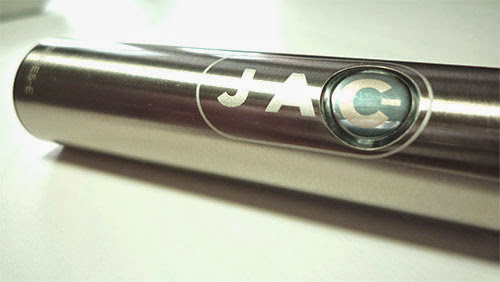 Being used to longer and thinner 900mAh eGo batteries, I found the power button a little too low down to reach with my thumb at first, and this took a little getting used to, especially as when filled, the device can feel a little top heavy when held at the very base.

That said, the short, stubby build of the Series-E is by far preferable to longer, more cumbersome batteries and is certainly compact enough to fit easily into a pocket.

The power button itself is very responsive and delivers a satisfying soft click when pressed.

In all, the Series-E battery and Aero Tank look very impressive together, and even with gentle tightening the whole unit locks together to form a very flush, streamlined and solid-looking device.

Just to see if they would fit (and work properly), I tested the Series-E battery with several different JAC Vapour Dual Coil 510 tanks, along with the Aero.

First up was JAC’s 510 Nova tank, which is one of the cheaper tank options and is designed for their smaller 510 batteries.

The Nova worked fine with the Series-E, fitting tightly onto the unit, and powering the atomiser without any trouble, but to be honest looked a bit strange with the huge battery attached, and not even the “beauty ring” could do much to change this.

I also attempted to attach one of JAC’s Crystal tanks, which likewise functioned perfectly, though this time actually looked much better despite the slight difference in width.

The 3-Click voltage switch is a useful and novel feature, as it means fewer moving parts and so less chance of things going wrong or jamming up.

Basically, you just click the power button three times quickly to level up to the next voltage setting. I found the 3-Click button action very intuitive thanks to the coloured lights that come on around the button depending on which voltage is  selected: red is 3.7 volts, green is 4.2 volts and white is the highest setting at 4.8 volts.

Personally, I do miss the spinner feature a little, and quite liked being able to choose between a range of voltages rather than being given a choice of three preset ones, though this 3-Click alternative certainly looks neater, and does the job almost as well.

Vapour production with the Aero attached was very consistent on the whole, and I found that after fiddling with the settings I was able to get really a very dense and mellow vapour with only short puffs.

My only suggestion for improvement is that the range of voltages could be wider. Vaping with a 3.0 ohm dual coil at 3.7 volts isn’t hugely different to vaping at 4.8volts, and this may be too subtle a difference for many users.

However, with a 1.5 ohm coil fitted, the difference is more obvious, though flavours were less mellow at 4.8 volts (white) and I ended up sticking to the 3.7 volt (red) power setting with this coil.

I found the optimum setting was 4.2 volts (green) with a 2.0 coil and an eliquid strength of 12mg, as this combination gave me great flavour and vapour with very small puffs.

Flavours also tasted fuller and rounder at all voltages with the 2.0 ohm coil and battery life was longer.

A 2.0 ohm coil is also ideal for stronger eliquids (18mg or higher) which produce a much rounder flavour and softer throat hit, even at the 4.8 volt (white) setting, though this being too much throat hit for me, I switched back to 4.2volts.

I also found that the higher resistance coils lasted longer (the last Japanese cotton 2.0 ohm coil I fitted is still going strong after 4 tank refills, versus two 1.5ohm coils that only made aound 3 fills each).

Overall, the Series-E is a novel and carefully-designed battery, and is robust and strong enough give you a good run for your money.

Unless you really crave the versatility of spinner batteries, you’ll probably enjoy the novelty of being able to switch voltages at the flick of a button, and this definitely makes for a simpler device that’s less likely to give you problems in the long run.

One thing that really stands out about the Series-E is that once you’ve found the coil/voltage setting/eliquid strength combo you like, you’ll find you can take much shorter puffs to get a very strong, mellow throat hit.

At £22.99, the Series-E battery costs a few pounds more than one of JAC Vapour’s regular eGo 510 batteries (around £18), though considering the high level of design and usability, I think it’s a rewarding purchase.

Considering also the much higher cost of buying serious big-battery mods (£100+) the Series-E battery certainly provides a value for money alternative, and makes for a very solid and reliable piece of equipment that will most likely last you a long time.

For best results with the Series-E, it’s worth getting hold of the Aero Tank, as it’s made to measure, and looks great with it, though the Protank 3 tank will also look fine.

However, if you already have a 510 tank unit or two to hand and need a high performance battery that is affordable, the cheaper Series-E basic kit is a perfect solution.

In terms of choosing dual coils, I would think it wiser to go for the higher resistance units (2.0 ohm) as these will last longer, taste better and won’t limit your range of available voltage options.

15% discount on Series-E (and on most other Jacvapour Products with this discount code: ECF

E cigarettes and e liquids contain nicotine, and are for sale to over 18s only. Always check supplier safety advice and instructions before use. Use e liquids and e cigarettes at your own risk. Some posts on Ecigfind feature affiliate links. These keep keep the blog running by generating small commissions, though this has no effect whatsoever on the price you pay as a customer for any product ordered via this site. This site uses cookies - please see privacy and cookies for details.