If you’ve ever felt scared of using your e cigarette in the street or supermarket, you’re probably in good company. Maybe now there’s some steam at the end of the tunnel…

E cigarettes and PVs have been around for a while now. 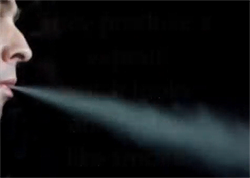 But some vapers still don’t feel one hundred percent comfortable about using them outside their own homes.

Many non-users still see e cigarettes as “weird-looking”. And we vapers are often reluctant to attract unwarranted attention. After all, who wants to be seen walking around puffing out fat clouds of thick vapour in public? Not everyone.

Now, UK ecigarette manufacturer JAC Vapour has come up with what they reckon is the ultimate solution. This is a vapourless e liquid, or “Clear Steam”. It promises to produce a clear, almost undetectable vapour out of any ecigarette device that you pour it into.

This means that when used as a refill liquid in e cigarette devices, Clear Steam will give a clearer, less obvious vapour.

Until now, most seasoned vapers have learned how to “stealth vape”. This involved hiding the vapouriser device in the sleeve or clenched fist and furtively inhaling long, deep puffs of vapour. You held the vapour in your lungs long enough for all of it to condense, so that little or no vapour was visible when the user exhales.

But this kind of tiresome surreptitious behaviour is just the kind of thing that puts many people off e cigarettes and gets them back onto smoking.

JAC Vapour seems to be the only supplier that is running with this “vapour-free” idea at the moment. However, the idea of vapourless e cigarettes strikes me as a step in the right direction.

My only concern about this idea  is that PG-only liquids are not liked by everyone. Many people prefer the slightly softer taste of glycerine-based e liquids, and others even claim to be allergic to PG. This suggests the idea might not be so popular with everyone.

There are also those (like me) for whom annoying others with massive clouds of vapour is a considerable source of joy and pleasure.