Making your own tobacco E liquid

Assuming you don’t want to spend several days making your own tobacco extracts from real tobacco, the easiest way to make your own DIY tobacco e liquid is to get hold of some pre-made tobacco extracts.

There are basically two main types of real tobacco extracts that you need to consider before making your own DIY tobacco e liquids: tinctures and flavour concentrates.

Tinctures (often also confusingly called concentrates) are the most powerful real tobacco extracts available and require only a few drops to transform your VG/PG/ nicotine base into a rich-tasting tobacco-flavoured brew. Though tinctures pack much more flavour than flavour concentrates, they are thinner in consistency, and usually much darker and more opaque in colour.

The great thing about real tobacco tinctures is that they go a long way and allow for huge flexibility in terms of flavour strength and quality, and in very small amounts. I usually add only 2ml of these real tobacco tinctures to my usual 50ml PG/VG/nicotine base to create a powerful and distinctive tobacco-flavoured e liquid, though you can get away with using even less if you prefer a lighter flavour. 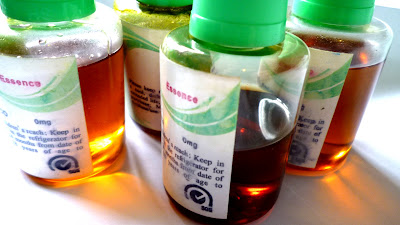 Tobacco flavour concentrates are more widely available than tinctures, and are cheaper in terms of the amount you get vs cost per unit. However, they are also much more dilute, so you need to add much more flavour concentrate per batch of DIY e liquid to produce the same effect as you would with a tincture. Hangsen is the best-known biggest producer of tobacco flavour concentrates, and  having tried most of these myself, I can recommend a handful of flavours: “Reds”, “Tobacco”, and “Turkish tobacco” and “Virginia” are all worth getting hold of, though be sure to avoid “Euro Blend”, and any of the clear-coloured bases, as these contain no tobacco extracts.

Despite the lack of concentration, tobacco flavour concentrates seem to add “body” to most home-brewed e liquids (at least in my experience) and I personally like to use concentrates at a ratio of about 10% in all my own e liquids, as they usually make for a softer, mellower vape in general.

Most DIY vapers have their own preferred blends of VG/PG/distilled water, etc, as indeed have I. Having now switched mostly to DL vaping, I tend to prefer much lower nicotine in my own. As for VG/PG mix, I likewise usually mix my own rather than ordering pre-made nicotine base liquid, as it tends to work out a lot cheaper, though I know some people who prefer the simplicity of buying their base liquid already mixed.

If you want extra authenticity and a smoother throat hit, your best bet is to try mixing with nicotine salts. These are more or less same as regular nicotine bases, but contain an additive which makes the nicotine easier to be absorbed by the lungs and bloodstream.

As a general rule of thumb, if you are using flavour concentrates (the thick, gloopy extracts) to make your own tobacco e liquids, you will need less VG, as your finished concoction will already be quite thick, thanks to the concentrate. I would also recommend a few seconds in the microwave when completely mixed, as this will make the finished liquid silkier and more fluid. Tinctures, on the other hand don’t tend to add much body to your juice, so try upping the VG to 50% or so in relation to overall PG content, and this will provide a slightly smoother, heavier draw when vaped.

DIY mixing your own e-liquids from your own ingredients is one of the cheapest ways to vape and can save you literally hundreds of pounds a year on vape juice. Here is a guide to Read more…

Until recently, I’d tried several times to make my own tobacco e liquid from real tobacco but every time the same old problems would emerge: my e liquids would take ages to brew, would always Read more…

This natural chocolate e liquid recipe is one I put on my first blog here a while back now, but it’s still as popular as ever and I’ve had a lot of great feedback about Read more…