Still a great favourite of mine, the Jac Vapour VGO2 e cigarette from has been around for a while now, though as yet I’ve found this e cigarette model hard to replace with anything anywhere near as good.

So what’s so great about the VGO2?

VGO2 batteries take a lot of beating in terms of output and performance, which are all-important factors when choosing an ecigarette kit.

Even the standard “Auto” model comes with chunky 650mah batteries and is perfect if you want a pocket-sized battery with loads of power.

On the other hand, if you hate recharging and prefer a few more hours more vaping time, the larger 900 mah battery VGO2 kit won’t let you down – the larger battery lasts me easily a full day (sometimes longer) on a single charge, even with fairly heavy use.

Buying the variable voltage version of the VGo2 will allow you even more control over battery power (as well as flavour and vapour strength).

All members of the VGO2 range have batteries that are compatible with both cartomisers and tanks.

I personally tend to prefer tank atomisers, as I find these need refilling less often, though the flavour of cartomisers is often stronger.

In addition to the choice of vapour attachments, for a few extra quid you might prefer to order the variable voltage version of the Jacvapour VGO2, which has an adjustable battery dial, allowing you to choose how strong you want vapour and flavour to be.

As with all Jacvapour ecigarette kits, using a VGO2 kit means you don’t have to keep coming back for expensive refills, as the blank cartomisers and tanks provided by Jacvapour are designed to be completely refillable.

This means you just have to stock up on blank cartomisers and a few bottles of your favourite eliquids from any store you like and you’re good to go for several weeks at a time.

Thankfully, all JAC Vapour VGO2 range kits come with two batteries and most cost considerably less than £40, meaning you can always have one battery charging while you’re vaping on the other.

Added to the fact that you can also refill these ecigarettes yourself (see above) it’s clear that the VGO2 range is better value than most.

It’s also worth knowing that currently you can get a full 15% on all products at Jac Vapour just by pasting this coupon code: ECF at checkout.

I am still on my first two VGO2 kits and am still pleased as punch with both.

The first (the variable voltage version) I bought nearly a year ago and the second a month or so afterwards. Both batteries are still working fine and are still putting out as much vapour as when I first bought them.

Both batteries and cartomisers are extremely strong and well-built, meaning your e cigarette is less likely to get damaged in transit; leakage is also extremely unlikely with tank versions in this range.

I’ve found that regardless of what eliquid you use, flavour from Jacvapour cartomisers tends to be a little softer and mellower than with other cartos, which can often be too hot, harsh or acidic.

VGO2 tank atomisers are likewise a flavoursome alternative, though flavour may be a little less strong, unless you go for the variable voltage VGO2, which allows you to control the strength and flavour of your puffs. 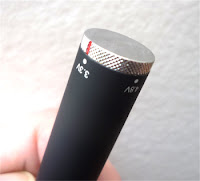 E cigarettes and e liquids contain nicotine, and are for sale to over 18s only. Always check supplier safety advice and instructions before use. Use e liquids and e cigarettes at your own risk. Some posts on Ecigfind feature affiliate links. These keep keep the blog running by generating small commissions, though this has no effect whatsoever on the price you pay as a customer for any product ordered via this site. This site uses cookies - please see privacy and cookies for details.