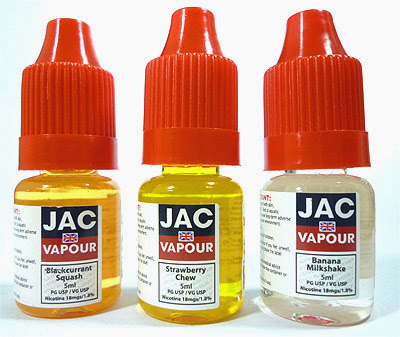 JAC Vapour has just released its new UK-made e liquid range, and they persuaded me to try some of these, against my will (I generally hate fruity vape juice).

The Banana Milkshake flavour smelt nice out of the bottle, and out of a clearomiser it did indeed remind me of the kind of banana milkshake I used to buy aged 16 waiting for a bus, though I found the sweet vapour of this e liquid had a tendency to make me cough for some reason.

Great flavour and very realistic, but a bit too much for an all-dayer.

The Strawberry Chew e liquid is another very realistic flavour, again very sweet and strong, though no coughing this time.

I could (and just have) vaped this flavour all day, though tomorrow I’ll be back on something more boring.

A lovely strawberry-like flavour, and soft, non-acidic vapour, though a little too artificial-tasting – more like strawberry ice cream than actual strawberries.

Quite a lot nicer than the Strawberry Chew was JAC’s Blackcurrant Squash flavour e liquid.

A very full and really fruity (as opposed to artificial) in flavour, and I felt this was a stronger, more rounded and mature flavour. Nice thick vapour and again, a very soft, alkaline bouquet overall.

Very tasty and worth a try.

I wasn’t looking forward to this one, and left it to last as I generally dislike the flavour (and texture) of actual raspberries, though in the end this was a pleasant surprise.

Once again, a much more mature and realistic fruity flavour, and a really full and satisfying flavour, which I kept wanting more and more of.

Extremely soft on the tongue and palate, no sharpness whatsoever and a lovely mellow throat hit. Liked this one so much I finished the 10ml bottle in three days.

In general, these fruity e liquids from JAC weren’t anywhere near as bad as I thought they might be, and I ended up actually enjoying two of them quite a lot.

Fruity flavours from some suppliers can often be overly sharp and harsh on the mouth tissues/mucous membranes and this is why many people, including myself, have issues with vaping on them as a rule.

However, apart from the banana flavour, I can honestly say that all of these liquids from JAC are very soft on the tongue and a nice change from tobacco flavours. Well worth a try, even for fruit-a-phobes like me!

E cigarettes and e liquids contain nicotine, and are for sale to over 18s only. Always check supplier safety advice and instructions before use. Use e liquids and e cigarettes at your own risk. Some posts on Ecigfind feature affiliate links. This site makes use of anonymous cookies - please see privacy and cookies for details.